The history of a Summer Variety Show is a rich one which can be traced back to 1894 and over the years a whole host of names have been associated with producing the show at the theatre.

In 2016 the Trust, who run the West Cliff decided to take back control of producing the Summer Show and a partnership was formed with AJL Theatrical (Aaron Lissimore). The 2020 production was cancelled due to the pandemic but was successfully staged in 2021. Plans are already in place for the 2022 production.

Aaron’s journey with the Summer Show actually started back in the late 80s when he appeared in The Cascade Revue as a ‘Tiffany Kid’. In 1996 he was cast as a Cascade Dancer, his first professional engagement and in 2006 he was approached by John Warwick to choreograph the Summer Special – a partnership which lasted for three happy seasons.

Exactly ten years later the opportunity arose to co-produce the show with the West Cliff and since then the reputation of The Summer Show has been elevated and the audience numbers have grown. Our goal has always been to produce a spectacle that recreates a memory of the past whilst reinventing the content of the shows to appeal to a broader audience. Essentially the key ingredients of co-productions are personality, skill, participation and novelty. Combined with our trademark glitz, glamour, vibrancy and energy we hope the shows will continue to entertain audiences for many years to come!

It all started back in 1894 when Bert Graham arrived in Clacton with his London Concert Company. They set up on an open air stage in Agate Road and by 1899 he, along with Bernard Russell & Will Bentley leased a patch of ground in West Cliff Gardens, the site of the present West Cliff Theatre.

In 1902 a new wood & canvas covering was erected to protect patrons from the elements & in 1907 the freehold of the land was bought. Finally in 1928 the current theatre was built. In 1934 Graham & Bentley retired and the theatre was bought by Will Hammer (who also set up the famous film company Hammer Productions LTD). 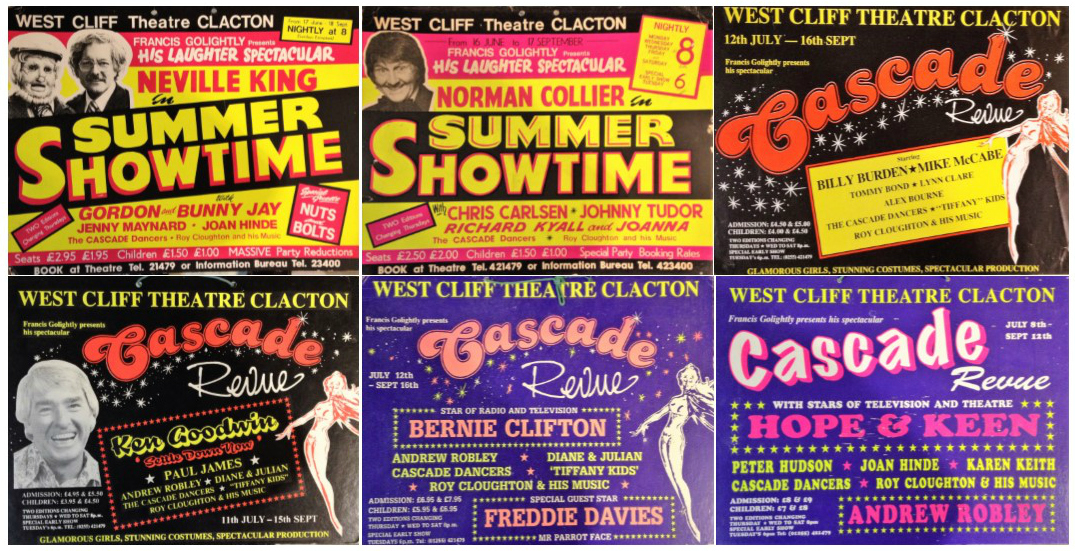 Over the years there have been many names associated with producing the Summer Show here at the West Cliff (John Warwick, Bunny Baron to name but two) but the name most people associate with the Summer Show is Francis Golightly. He produced the annual show from 1973 until 2001 bring a whole host of performers to the theatre – Don Maclean, Ken Goodwin, Norman Collier, Bernie Clifton, Freddie Davies, Kenny Cantor, Andrew Robley, Ruthie Henshall – to name but a few.

Francis is just one in a long line of Producers who have been part of the Summer Show story; a rich history of variety that has and remains a key part of the West Cliff story.

But it isn’t all about the Summer, since 2017 the West Cliff and AJL Theatrical have also been producing The Christmas Show. Aimed at those who’d like something a little different from the usual Pantomime offering, The Christmas Show is all about offering the ‘Glitz & Glamour’ along with plenty of Festive Family Fun.