An Evening With Graham Cole OBE

“So You Think You Know Me”

This show was originally set up on 2020 Social Distancing regulations. We may have to re-allocate seats nearer the performance and can only apologise in advance.

Graham is best known for his 25 year role as Tony Stamp in The Bill but there is much more to Graham than that one role. From Doctor Who to an ’00’ agent in the James Bond film ‘The Living Daylights’, and of course Pantomime, Graham has enjoyed a wide and varied career.

Join him and us as we re-open the West Cliff Theatre with this Socially Distanced One Act Show which promises plenty of anecdotes, inside gossip and you can even ask your own questions.

END_OF_DOCUMENT_TOKEN_TO_BE_REPLACED

The masterful, outrageous and hysterically funny comedy legend ‘General’ Jim Davidson OBE’ embarks on his postponed comedy campaign around the UK in 2021, following the acclaimed sell-out ‘The People Fight Back’ Tour.

Who will he upset this time? Which battles will he win, which will he lose? One thing’s for certain, Jim never retreats!

He has entertained soldiers across the world and yet, as a comic, he still takes no prisoners at home.”★★★★★

Absolutely a fantastic night! Tears was running down my face, this is the second time I’ve seen Jim’s show and would go back a third time! Absolutely amazing! ★★★★★

Davidson does not receive the true credit he deserves… you get what you expect – there are no airs and graces. You receive the simple, filthy comedy which is expected from such a comedy legend. ★★★★★

A comic who has timing down to a fine art. An on-stage, international perfectionist. ★★★★★

Last week Jim Davidson came, he saw, and he conquered a sell-out audience. ★★★★★

END_OF_DOCUMENT_TOKEN_TO_BE_REPLACED

Join some of TV`s best-loved comedy legends in a hilarious glimpse of life behind the camera in a celebration of classic TV Nostalgia. Starring SUE HODGE (`Allo `Allo! & The Muppets); JEFFREY HOLLAND (Hi-De-Hi; You Rang M`Lord; Dads Army); SALLY THOMSETT (Man About The House, The Railway Children); PLUS A SURPRISE GUEST APPEARANCE TO BE REVEALED AT EACH PERFORMANCE. WHO WILL IT BE TODAY?

With Keith `Paddington` Richards at the piano, plus the screening of some `rare` TV comedy moments, and with an opportunity to ask the questions you’ve always wanted to, prepare for some hilarious backstage stories and great laughs in a fascinating golden celebration of some of the greatest TV comedy moments of all time!

PLUS- Meet the cast after the show and have your photograph taken with them for an ideal take-home souvenir, and Sue Hodge will be signing her best-selling, hilarious `Allo `Allo book, `Mimi`s Memoirs`.

END_OF_DOCUMENT_TOKEN_TO_BE_REPLACED 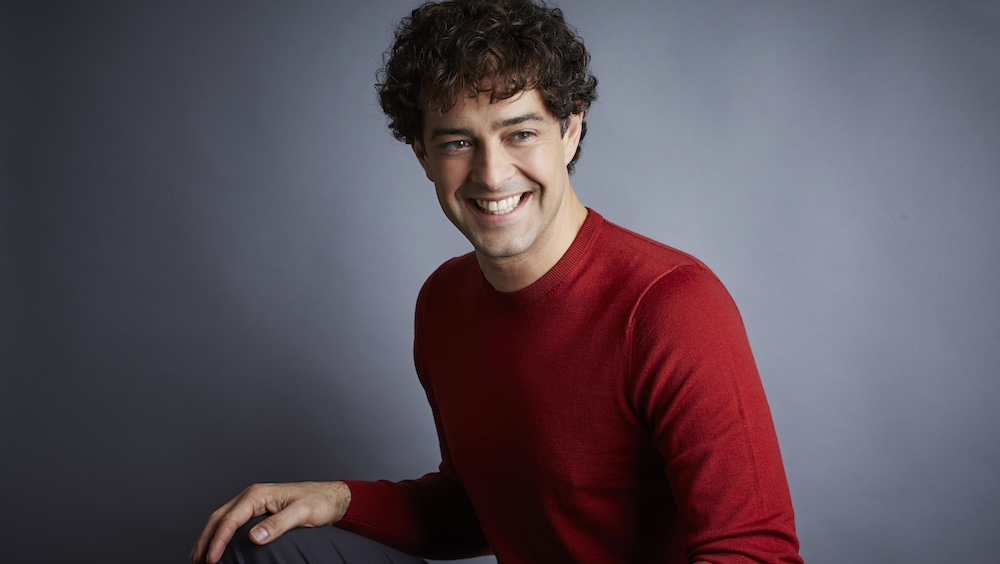 West End & TV star Lee Mead and his band bring an exciting new show to you for a limited season of concerts in Autumn 2021. Singing songs from his five hit albums, Lee will leave the audience wanting more as he performs fan favourites and popular songs from the West End and Broadway.

Lee has starred in West End shows including Wicked, Legally Blonde, Phantom of the Opera, Chitty Chitty Bang Bang and the role he made famous after winning ‘Any Dream Will Do’ on the BBC in 2007, Joseph and the Amazing Technicolour Dreamcoat. For over 12 years he has been a household name and most recently has been playing Nurse ‘Lofty’ in Holby City on BBC 1.

As a singer, Lee has performed with Josh Groban, Susan Boyle, Michael Ball and Donny Osmond to name a few and is himself a Double Gold selling artist. He is delighted to be back on the road again doing what he loves most, singing fantastic songs with a wonderful live band.

END_OF_DOCUMENT_TOKEN_TO_BE_REPLACED

We are thrilled to welcome Marty & the Wildcats back for yet another stonking show here at the West Cliff.

His show, Born to Rock ‘n’ Roll, in which he performs with ‘The Wildcats’, has received critical acclaim and has not only thrilled his loyal fans but also a whole new generation who are just discovering the man who stormed the charts with ‘Rubber Ball’ and ‘Teenager In Love’.

This is a night not to be missed.

END_OF_DOCUMENT_TOKEN_TO_BE_REPLACED

He’s a legend and an Icon, a revolutionary and an immortal. John Lydon – aka Johnny Rotten – changed the face of music and sparked a cultural revolution. The front man and lyricist of the Sex Pistols and Public Image Ltd (PIL) caused a political earthquake and transformed music for good.

To coincide with the publication of his new book, the brilliant, funny and insightful I Could Be Wrong, I Could Be Right, he is touring the UK. Lydon will talk about how he sees life, along with his unique and extraordinary career, and take audience questions during a pyrotechnic, one-off tour.

Signed books will be available to buy at the venue which John will pre-sign. He WILL NOT be signing them at any pre/after showtime.
END_OF_DOCUMENT_TOKEN_TO_BE_REPLACED

Michael English is currently packing out venues all over Ireland & the UK for both concerts & dances. Michael & his talented Band are renowned for their energetic performances & Michael’s superb piano playing. He is dedicated to giving his followers an unforgettable show each time they see him. And with accolades like “Best Country Dance Band” at The Irish Country Music Awards & “Entertainer of the Year” & “Songwriter of the Year “at The Sunday World country Music Awards under his belt there is no stopping the Kildare man!

Michael has his own TV show on Sky Channel 376 & has enjoyed recent success with hit singles “Songs I Remember” & “Waltz of a Lifetime”. Michael is also starring in & has co-written a musical which he has toured Ireland with & hopes to bring to the U.K soon!

END_OF_DOCUMENT_TOKEN_TO_BE_REPLACED

Best known as one of the stars of ITV1’s hit series ‘Benidorm’ and a multi award winner, Crissy is better known to her fans as one of the most outstanding and outrageous stand up comedians of her generation. From her hilarious routines directed at useless partners (well, men in general) to her journey through the onset of middle age, Crissy’s non-stop blasts of comedy brilliance hit the right note every time.

You may have seen Crissy more recently on Lorraine, Loose Women, The Full Monty, Celebs on the Farm and Celebrity Masterchef, but in 2021 she’s hitting the road and coming to a venue near you for an evening guaranteed to have you rolling in the aisles with laughter!

‘A comic force to be reckoned with’ – The Stage

‘A smile as funny as the Costa Del Sol’ – Daily Mirror

END_OF_DOCUMENT_TOKEN_TO_BE_REPLACED

The Fizz – Up Close and Personal

Up Close and Personal Evening with The Fizz

Come and join Cheryl Baker, Mike Nolan and Jay Aston (The Fizz) for an up close and personal evening.

The night is the “warts and all”, behind-the-curtain story of Bucks Fizz – from being put together and winning the Eurovision Song Contest to becoming one of the most successful bands of the 1980s with five No1 hits and ten top ten hits.

This is a must for any Fizz fan – and all backed up with projection and images as they tell their story of what it’s like to be part of one of Britain’s most successful pop groups, all interspersed with the hit songs.

A Q&A will also take place on the evening and you can ask them absolutely anything. . . this is a night not to be missed for everyone!

An evening full of music, laughter and nostalgia, this is must for any lover of the 80s.

END_OF_DOCUMENT_TOKEN_TO_BE_REPLACED

The biggest and best 60’s show touring the UK returns to The West Cliff Theatre Clacton for one night only, with a brand new production for 2022.  The Sensational 60’s Experience brings you a three hour 60’s spectacular of pure nostalgia.   The show with the definite feel good factor will transport you back to that magical decade that was the 1960’s. The Sensational 60’s Experience will deliver to you a night never to be forgotten where you’ll find it impossible to remain in your seat.

MIKE PENDER MBE (original voice of The Searchers)  Originally formed as a Skiffle group in Liverpool in 1959. Mike and the band took their name from the John Ford Western, The Searchers starring John Wayne.  Hits include Needles And Pins, When You Walk In The Room, Love Potion Number 9.

THE TREMS (all former members of The Tremeloes) Starting out as an English beat group founded in Dagenham Essex in 1958, originally called Brian Poole And The Tremeloes. Hits include, Even The Bad Times Are Good, Do You Love Me, Silence Is Golden.

DOZY BEAKY MICK & TICH. Originally called Dave Dee And The Bostons formed in 1961. Changing their name to Dave Dee, Dozy Beaky Mick and Tich in 1964. In 1966 the band were in the charts for 50 weeks out of 52. In Germany alone in 1967, record sales out sold The Rolling Stones and The Beatles. Hits include Bend It, Zabadak and The Legend Of Xanadu plus many more.

THE FORTUNES. Hailing from Birmingham England, the band first came into prominence in 1964 with their hit single Caroline, which was used as the signature tune for the influential Pirate Radio Station of the same name. Other classics include, Storm In A Teacup, You’ve Got Your Troubles, Freedom Come Freedom Go.

THE DAKOTAS. Originally convened as a backing group from Manchester, the band were largely associated with Billy J Kramer. Hits include, Little Children, The Cruel Sea, Do You Want To Know A Secret.

END_OF_DOCUMENT_TOKEN_TO_BE_REPLACED

Herman’s Hermits, one of the biggest selling bands of the 60’s, not just in the UK, but around the World.

From their early beginnings in Manchester in 1964, the band have chalked up 23 Hit Singles, 10 Hit Albums, appeared in 3 Major Movies and to date they have sold in excess of 75 Million records worldwide.

END_OF_DOCUMENT_TOKEN_TO_BE_REPLACED

Join Jones as he goes from the back of Claudia’s area to starring in his very own dance show like you have never seen before – comedy, special effects and a lot of outstanding dancing. Neil will show you the real reason he’s a three-time World, eight-time British Champion and well-known choreographer in the world of Ballroom dancing.

Neil will take you on a journey showcasing what made him unique within the dancing world and introduce you to the very people who influenced him as a dancer. It just so happens that they were all Ginger, including Nell de Jaunse, who made an appearance on Strictly sister show It Takes Two.

Prepare yourself…you are in for a night you will never want to forget!!